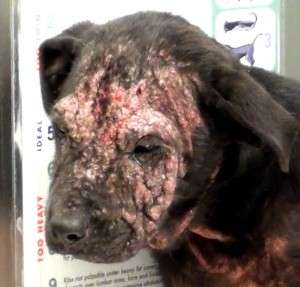 They had given up on her. She was set to be put down. Who would want a puppy who looked like this?
Would anyone give her a chance? The local authorities thought she was hopeless… and then a group stepped in who wanted to give her a fighting chance… and fight she did.

When “Crusty” arrived at the ranch, she was a frightened, disfigured puppy. She was afflicted with mange on her face, legs and stomach. You’d be hard pressed to find a more appropriate name for her in those days than Crusty. Dog rescue is not for the fainthearted, and it would take a visionary to see her true potential. She found that in Dr. Kerri. She is part of  Vet Ranch, a non-profit clinic that features dog rescue stories on YouTube,

Dr. Kerri, doing her best to see past the mange, thought that she was a probably a Lab mix. She was on death row because of her condition. Luckily she had been pulled from the shelter and taken to the ranch. Crusty was hard to look at because her disfigurement and obvious discomfort. Many would have chosen to euthanize her thinking she couldn’t be cured.

Mange or demodicosis is a skin condition caused by different types of mites. A dog with a weakened immune system can be more susceptible to this condition and it can be quite serious depending on the severity. The mites invade the hair follicles and skin of the animal. Complications include skin lesions, the loss of fur and genetic problems. Skin patches develop and spread to more and more of the dog’s body if left untreated.

A bath was desperately in order for Crusty, perhaps her first. As Dr. Kerri gently soaped and massaged her, the frightened pup practically melted from the warm comfort of it all. By the end of it, she was snuggled in towels and almost passed out. What pure pleasure it must have been for her. Perhaps in her limited understanding she felt some hope for a different and better life.

As the days and nights passed, the partnership between Dr. Kerri and Crusty grew stronger. Three weeks after her arrival at Vet Ranch, Crusty was a different dog. An amazing transformation had taken place and Crusty was now “Christy”. Dr. Kerri noted that she still had little scabs on her feet, but her face was tremendously improved and clearing up. New fur had grown in and once she was spayed she could move on to her forever home.

From Crusty to Christy. Who Knew This Puppy Was Under That Sick Dog!

Watch her incredible transformation in the video below. 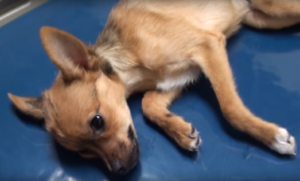 Tater Tot the Parvo Puppy is too weak to move.

Another critical case that Dr. Kerri treated was a tiny, 16 week old puppy named Tater Tot. This little guy had parvovirus which is quite often fatal. It is easily prevented with a vaccine, but this puppy hadn’t been vaccinated and now was deathly ill.

Now that Tater Tot was so ill the only thing to do was to let the virus run its course through his body. He also needed some critical intervention. His blood pressure and temperature were very low. He was so severely dehydrated that his blood resembled syrup. He had fleas crawling over his body and face and he was infested with hookworms. Though the fleas and hookworms weren’t lethal, they complicated the situation and made the little guy even more uncomfortable.

He needed to be rehydrated very quickly in order for him to have a chance and to support his recovery. His veins were tiny which made things difficult for Dr. Kerri. She was eventually able to insert an IV which then allowed him to receive a dextrose solution containing sugar and fluids. He also received medication to help his blood pressure.

These interventions worked miraculously to improve his situation and give the staff reason to hope he might make it. It was still a long shot though. Dr. Kerri observed that Tater was now lifting his head a bit, and she was hoping that he would be one of many amazing rescue stories.

Within a few days, he was able to hold up his head and look around a bit. Dr. Kerri even observed a little tail wag. He still wasn’t eating, but that was a normal symptom with this virus. Hopefully, he would try some food soon. If not, he could be coaxed to eat by having some food put in his mouth.

Eventually, Tater began to try some food. The catheter still taped to his leg made him think he couldn’t walk on it. That was soon removed and he began to resume and take part in life. He became a crazy, happy, normal puppy ready to meet his new family and go to his forever home.

Dr. Kerri noted that this puppy could have easily died from a very preventable disease. Parvovirus may not sound too nasty, but it is highly contagious and very dangerous for puppies. Their immune systems are not as developed as those of older dogs. Tater Tot had the intestinal manifestation of the virus, but it can also present as a cardiac illness. The cardiac version is often contracted in the womb from the mother and is usually fatal.

Once a dog has contracted parvovirus, he will always be a carrier and may shed the virus at various times in his life. Other dogs can pick up the virus or by coming into contact with the feces of a dog with an active virus. It’s very important to vaccinate your dog to protect him from his peers who haven’t been vaccinated. A female who is a carrier of the virus can pass it on to her litter, and there’s not much that can be done to save them.

Even if a dog has been diagnosed with the virus and successfully treated, it can live for months in feces and on surfaces in the home. A puppy should not be brought into the home for at least six months and after appropriate decontamination with a bleach and water solution.

Vet Ranch is a wonderful organization that has gained a following on YouTube with their amazing rescue stories. Many viewers have donated to their cause to fund treatment for the mistreated and often abused pups that end up at their facility. They also partner with a number of organizations that are dedicated to animal rescue and share their passion. The kindness and generosity of the vets and the many donors transforms these sick dogs and puppies into lively and loving pets. 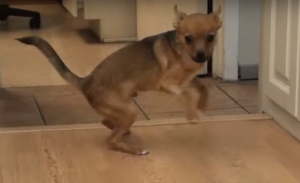 Check out his video. What a miraculous transformation and recovery!