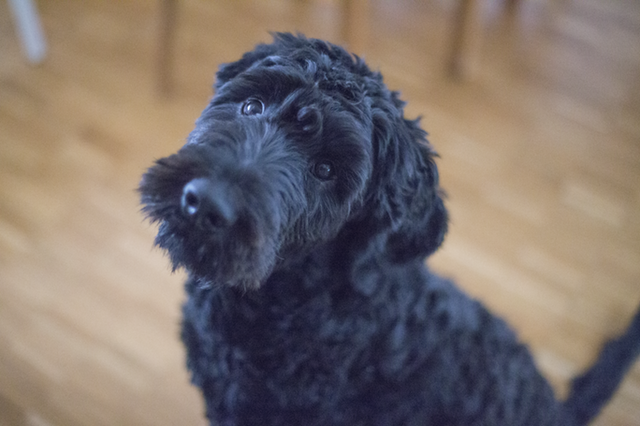 Dogs have a way of tugging at our heartstrings as they continue to entertain us, eat us out of house and home and challenge our budget. On top of all this, they can be just plain weird at times. It doesn’t matter because we’ll still love them and still do our best for them. So let’s take a closer look at some of these odd dog behaviors that may perplex the most experienced of owners.

You may ask, “Why does my dog cock her head?” It’s so easy to imagine that she is listening and deeply involved in processing what you’re saying as you pour out your heart to her. No wonder dogs are man’s and woman’s best friend! However, it may be nothing more than her processing. It’s called triangulation and it allows the dog to determine the location of the sound. Your dog’s ears are like stereo receivers. The brain is able to calculate the delay by comparing the time the sound hits the nearest ear versus the farthest ear. Amazingly, your dog can estimate the distance the sound has traveled and its source with this natural talent. We know a dog who can hear the sound of her owner tying her shoes through the closed bedroom door. When the owner emerges, the dog goes crazy anticipating a walk! No doubt she’s sitting outside the door cocking her head right and left as she waits.

There might be a more satisfying reason for the head tilting behavior. Your dog is listening for a command from you or that delectable moment you say “treat” or “outside” or “ball”. Since dogs can understand some language, this is a plausible explanation. This is much more satisfying to us than just a physiological response to sound.

Dogs don’t have a moral compass like we do. When they take something, it’s not stealing in a pooch’s mind. The behavior may occur for the purpose of enjoying a good chew on a stinky sock. He may be hiding your favorite shoe somewhere so that you’ll come looking for it. Just maybe you’ll have some time to play in the process. It could be he loves the baby’s toy so much that he wants some uninterrupted time with it. Perhaps that shirt or underwear would look better in his crate. It might also add some soft cushion not to mention remind him of you while you’re at work all day. Maybe he’s hungry and it smells like food. Your dog may be bored, lonely or just curious when he makes off like a bandit with your valuables.

Theories abound about why dogs lean on their humans, and the truth lies with the individual dog. Some dogs lean because they are fearful, insecure or overwhelmed. Others are more aggressive and like to establish their territory. Your dog may lean on you out of pure affection or because he gets the positive reinforcement of being scratched or massaged.

Most owners seem to enjoy that their pets lean on them or the variation of sitting on their feet. It’s nice to feel wanted and leaning against a beloved master can feel like bonding or affection to your pet. But if you need some personal space from your dog, train him to take a step or two away on command or go to his bed.

Carry Food Away from the Dish

You might be puzzled about why your dog feels the need to take food away from his dish. Remember, your dog’s ancestors were wild animals who had to use their claws and teeth to hold and tear apart their meat. Just because today’s pet food is simple and non-threatening doesn’t mean your pet can overcome his natural instincts. Eating was entertainment that required considerable effort back in the day. With the element of survival added in, it makes it that much more exciting. We knew a dog who took a tiny mouthful of food, deposited it several feet away on the carpet and then went back to the bowl to finish her meal. It’s difficult to discern the motives of our dear pets.

Why does it have to be that a dog, and particularly a puppy, will eat poop? There’s no justifiable explanation for this dog behavior, but we will try. The best-case scenario is that he is imitating you scooping up poop in the yard, but that’s pretty lame. We can always include boredom and curiosity as possible factors in anything your canine may do.

Eating poop may appeal to his sense of smell or taste. Or perhaps he is simply hungry. You’ve might have heard of pica where people eat a variety of non-food items like rocks, soil or paperclips. (Animals can suffer from pica, too.) The official name for eating poop is coprophagy, and it’s possible that it could indicate some missing nutrient in his diet.

Sleep in a Ball

It seems obvious that a dog sleeps in a ball for the security, coziness, and warmth that this position provides. It’s almost as if he’s creating his own den, but perhaps there are some other reasons. His turning around in circles several times before settling down helps set him up for getting into the curled-up ball position. He may also be curling up to protect his vital organs from attacks by predators.

There are several other interesting sleeping positions you may notice. Sleeping super flat against the floor or sleeping on his back with his belly exposed and his paws in the air are common ones. For the most part, your dog’s sleeping position probably comes down to pure comfort just like for the rest of us.

When you’re asking why does my dog do this or that, remember that they are individuals with their own adorable personalities. Enjoy your pet’s nuances and quirks, but be sure to consult a veterinarian if a behavior seems even more bizarre than usual. You know your dog. If you’re questioning something, don’t hesitate to check it out.

7 Great Ways To Make Your Dog Happier
To Top